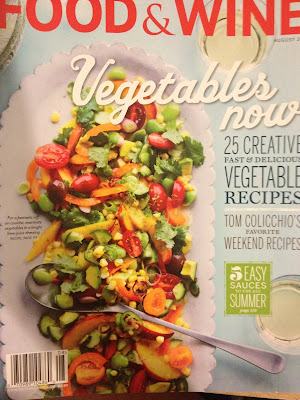 I have made so many great vegetarian salads this summer (more about that at another time) but this one on the cover of Food and Wine is phenomenal. If you didn’t get a copy of August 2013 Food and Wine, here is the recipe. The whole August issue was a winner. Lots of colorful, flavorful recipes using produce.

I had a ton of fun shopping for ingredients at the Davis Ranch in Slough House, California outside Sacramento. I made a few very successful substitutions.

1. In a small saucepan of salted boiling water, cook the Lima beans until tender, about 10 minutes. Drain the beans under cold water.

2. In a large bowl, whisk the lime zest and juice with the olive oil, scallion, jalapeno, and shallot; season the dressing with sea salt. Gently fold in the Lima beans, corn, nectarines, avocado, orange bell pepper, and tomatoes. Refrigerate for two hours. Fold in the cilantro just before serving.

Make ahead- This salad can be refrigerated up to eight hours. I actually found it was still delicious several days later, after finishing much of it myself.

Feel safe in doubling this recipe. As I said, ours did not go to waste.