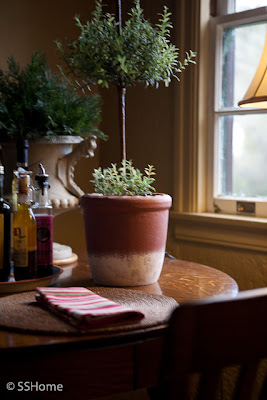 It was time.  I had been putting off replacing my appliances and refinishing my kitchen floors until four weeks ago.  When my refrigerator broke down it was the final straw.  I purchased a new dishwasher while I was at it and it came and has been installed but the fridge had to be special ordered.  I have been without cold food for almost a month. 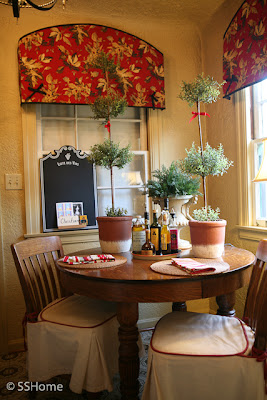 Today the floor re-finishers are here.  They pulled up the old vinyl floors from the 70’s and low and behold found beautiful Douglas fir.  I chose a dark ebony finish, warm without any hints of purple.  The only challenge so far is water stains in the corners.  To deal with that problem we decided on going darker with the finish to make the water stains less obvious.  Custom valances from Shiree Hanson Segerstrom in a red Ralph Lauren leaf print with Fabricut black linen on the small welts and ties.  The arches on the valances were designed that way to call attention to the arched doorways.  The windows beneath do not have arches. 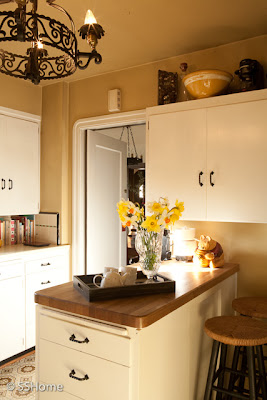 When we first bought the house in 2000 the cabinets were a light maple and the walls a dreadful grayish- greenish-tan’ish-white no one color could describe.  The drawer and cabinet pulls were a 1960’s copper.  The light fixtures were not even worth mentioning.  The island counter was the worst feature however.  The previous owners, normally so good at maintaining the lovely architecture, slipped up and installed a neon greenish yellow laminate.  It was the first thing to go. 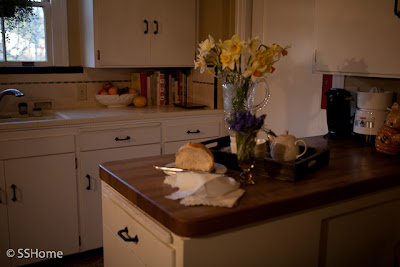 The back splash is about the only thing original to the kitchen.  Everything else was redone in the fifties and seventies and now, by me, over the course of several years.  When I chose lighting and pulls I decided on black wrought iron for continuity with the rest of the house and a fun thing happened.  My friend Melanie found three perfect, very old iron hanging fixtures, one of which she purchased from the owner of another Simpson built home! 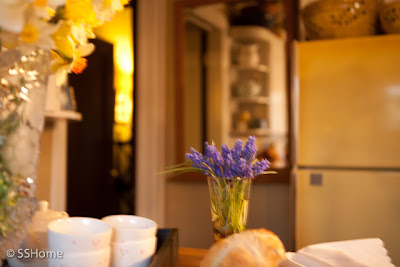 This is a shot of the old Harvest Gold refrigerator soon to be replaced with a Frigidaire Gallery stainless steel.  The color of the appliances is what dictated the initial color scheme in the kitchen. 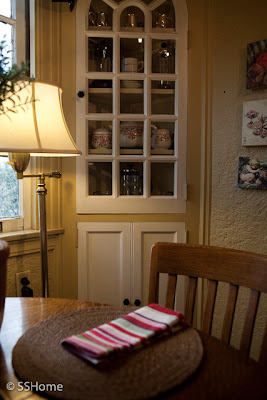